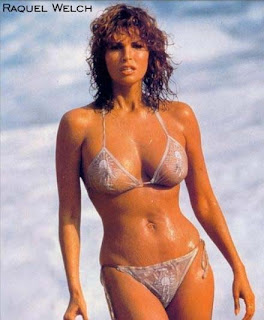 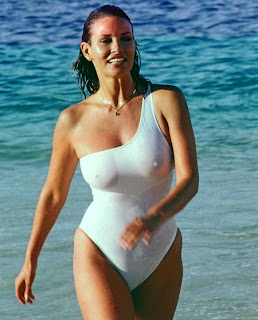 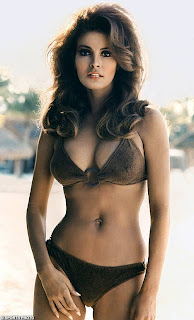 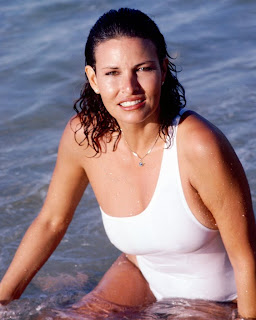 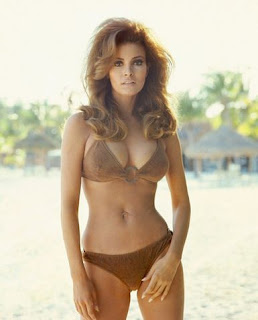 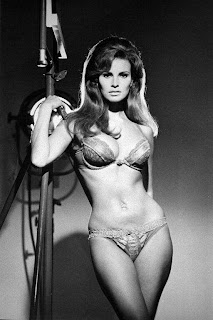 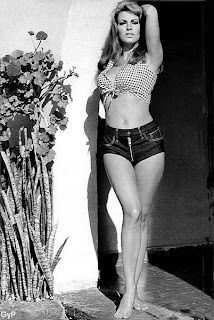 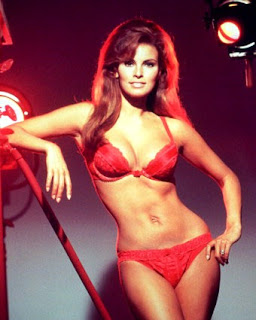 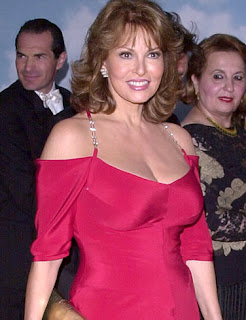 A new reigning 1960s international sex symbol took to the cinematic throne as soon as Raquel Welch emerged from the sea in her purposely depleted, furry prehistoric bikini. Tantalizingly wet with her garb clinging to all the right amazonian places, One Million Years B.C. (1966), if nothing else, captured the hearts and libidos of modern men (not to mention their teenage sons) while producing THE most definitive and best-selling pin-up poster of that time. After a major dry spell following the death of Marilyn Monroe in 1962, the auburn-maned Ms. Welch effortlessly assumed Marilyn's place and forever wiped away the notion that enduring sex goddesses came only in one form -- bottled blonds.
She was born Jo Raquel Tejada on September 5, 1940 in Chicago, Illinois, the first of three children born to Bolivian Armando Carlos Tejada Urquizo, an aerospace engineer, and his Irish-American wife Josephine Sarah Hall, who was the daughter of American architect Emery Stanford Hall (1869-1939) and his wife Clara Louise Adams. The family moved to San Diego, California (her father was transferred) when Raquel was only two. Taking dance lessons as a youngster, she grew up to be quite a knockout and nailed a number of teen beauty titles ("Miss Photogenic," "Miss La Jolla," "Miss Contour," "Miss Fairest of the Fair" and "Miss San Diego"). With her sights set on theater arts, she studied at San Diego State College on a scholarship starting in 1958 and married her first husband, high school sweetheart James Welch, the following year. They had two children Damon Welch (born 1959) and Tahnee Welch (born 1961). Tahnee went on to take advantage of her own stunning looks as an actress, most notably a prime featured role in Cocoon (1985).
Off campus Raquel became a local TV weather girl in San Diego and eventually quit college. Following the end of her marriage in 1961 (she and Welch didn't divorced until 1965), she packed up her two children and moved to Dallas, Texas, where she modeled for Neiman-Marcus and worked as a barmaid for a time. Regrouping, she returned to California, migrated to Los Angeles, and made the rounds of film/TV auditions. Providing minor but sexy set decoration on the small screen ("Bewitched" (1964), "McHale's Navy" (1962) and "The Virginian" (1962)) as well as the large (Elvis Presley's Roustabout (1964) and Doris Day's Do Not Disturb (1965)). Caught in the midst of the "beach party" craze, it's not surprising to find out that her first prime film role was A Swingin' Summer (1965), which concentrated more on musical guests The Righteous Brothers and Gary Lewis & The Playboys than on Raquel's outstanding contributions. But 20th Century Fox certainly took notice and signed her up.
With her very first film under contract (actually, she was on loan out to Britain's Hammer Studios at the time), she took on the remake of One Million B.C. (1940) in the Carole Landis role and the rest is history. Raquel remained an international celebrity in her first few years of stardom. In England, she was quite revealing as the deadly sin representing "lust" for the comedy team of Peter Cook and Dudley Moore in their vehicle Bedazzled (1967), and as the title secret agent in the sexy spy spoof Fathom (1967). In Italy, she gained some exposure in primarily mediocre vehicles opposite such heartthrobs as Marcello Mastroianni. Back in the U.S., however, she caused quite a stir in her ground-breaking sex scenes with black athlete Jim Brown in the "spaghetti western" 100 Rifles (1969), and as the transgendered title role in the unfathomable Myra Breckinridge (1970). Adapted from Gore Vidal novel, she created some unwelcome notoriety by locking horns with aging diva Mae West on the set. The instant cult movie was a laughingstock to all concerned and certainly didn't help Raquel's attempt at being taking seriously as an actress.
Box office bombs abounded. Try as she might in such films as Kansas City Bomber (1972) and The Wild Party (1975), which drew some good reviews for her, her sexy typecast gave her little room to breathe. With determination, however, she partly offset this with modest supporting roles in larger ensemble pieces. She showed definite spark and won a Golden Globe for the swashbuckler The Three Musketeers (1973), and appeared to good advantage in the mystery thriller The Last of Sheila (1973). She planned on making a comeback in Cannery Row (1982), even agreeing to appear topless (which she had never done before), but was suddenly fired during production without notice. She sued MGM for breach of contract and ultimately won a $15 million settlement, but it didn't help her film career and only helped to label her as trouble on a set. TV movies became a positive milieu for Raquel as she developed sound vehicles for herself such as The Legend of Walks Far Woman (1982) (TV) and Right to Die (1987) (TV). She also found a lucrative avenue pitching beauty products in infomercials and developing exercise videos à la Jane Fonda.
Raquel took advantage of her modest singing and dancing abilities by performing in splashy Las Vegas showrooms and starring in such plausible stage vehicles as "Woman of the Year" and "Victor/Victoria." Still a dazzler broaching age 70, Raquel continues to show up here and there and still can turn heads. She has even spoofed her own diva image on occasion, most memorably on "Seinfeld". More recently she has co-starred in the Hispanic-oriented TV series "American Family" (2002) and in the short-lived comedy "Welcome to the Captain" (2008), and appeared in the movies Tortilla Soup (2001), Legally Blonde (2001) and Forget About It (2006/II). She is separated from her fourth husband Richard Palmer, who is 15 years her junior.
at 4:56 AM
Email ThisBlogThis!Share to TwitterShare to FacebookShare to Pinterest
Labels: Raquel Welch